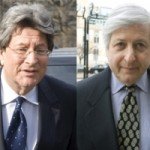 Garth Drabinsky and Myron Gottlieb, former top Livent executives, have been granted an extension of bail pending their criminal appeals.

Both men were convicted of two counts of fraud and one count of forgery by Ontario Superior Court Justice Mary Lou Benotto on March 25, 2009, and last August they were handed record prison terms for orchestrating the massive accounting fraud at Livent. The Livent case has been pegged as “Canada’s WorldCom.”

CBC news reports that this extension comes in a case that has been going on for nearly a decade. The criminal case began in October 2002 when the Royal Canadian Mounted Police charged the former Livent executives with defrauding investors of $500 million. That came three years after the U.S. Attorney for the Southern District of New York and the SEC filed criminal and civil charges against Drabinsky and Gottlieb in 1999.

Drabinsky and Gottlieb are now asking the Canadian Court of Appeal to overturn the fraud convictions and prison sentences, which are seven years for Drabinsky and six years for Gottlieb.