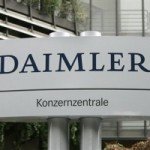 Daimler AG, the German car company, has agreed to pay $200 million to resolve a U.S. investigation into whether it paid bribes to secure business overseas. Two of its subsidiaries will plead guilty as part of the deal.

With this agreement, the carmaker seeks to conclude a DOJ probe of whether it violated the Foreign Corrupt Practices Act by bribing government officials and a related civil investigation by the SEC, Bloomberg reports.

The deal has been presented to U.S. District Judge Richard Leon in Washington, and is subject to his approval.