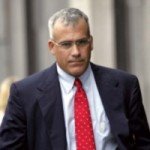 Reyes was convicted of conspiracy and fraud in August 2007 for backdating employee stock options at Brocade. He was sentenced to 21 months in prison and ordered to pay a $15 million fine. The Ninth Circuit reversed the conviction last year, throwing out 10 counts of illegal backdating on account of prosecutorial misconduct.

The retrial, which is taking place in San Francisco, is expected to last several weeks. During his opening statement, Assistant U.S. Attorney Adam Reeves emphasized that Reyes himself received backdated options. Reeves said Reyes undertook the scheme in order to “pad his own pocket,” and that while he never cashed in on the options, Reyes granted millions of dollars in the stock bonuses to himself and his employees without disclosing the expense to shareholders.