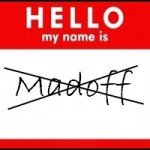 Bernard Madoff’s daughter-in-law, Stephanie Madoff, has now reportedly filed court documents seeking a name change. She cited death threats against her family as the reason for the desired change. According to CNN Money, she wishes to avoid further embarrassment associated with her father-in-law’s name.

Stephanie is married to Bernard Madoff’s son, Mark. She will change her last name and the last names of her two children to Morgan, and Madoff will become the children’s middle names. CNN Money reports that Mark Madoff does not object to the name change.