A Glimpse Into SEC Enforcement, by Way of Goldman 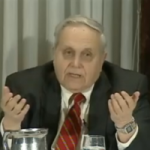 In a time of ongoing heightened scrutiny for the Securities and Exchange Commission, many current and former leaders of the SEC’s Division of Enforcement met recently for an extraordinary panel discussion at the National Press Club in Washington, D.C.

Heading into the event, which occurred April 19, the panel already had a full slate of issues it planned to address. But all that took a massive detour thanks to events on the previous Friday, when the SEC filed civil charges against Goldman Sachs alleging fraud in the structuring and marketing of collateralized debt obligations tied to sub-prime mortgages. Considering the audience, the perfect timing of the Goldman charges was, as Judge Sporkin quipped, enough to ”make me believe in God.”

The panel examined many of the toughest issues facing the SEC today, the Goldman case included. A recap of the night is presented below.

Judge Sporkin described the Goldman case as “stunning” and proof that the SEC is beholden to nobody. His primary conclusion, however—and his unsolicited advice to Goldman Sachs CEO Lloyd Blankfein—was that disputes like this “cannot really [be] litigated with your regulator. Fannie Mae learned that. Arthur Andersen learned that.” To Judge Sporkin’s thinking, Blankfein should get on the next plane to Washington, D.C., to meet with SEC Enforcement Director Rob Khuzami and settle the case. “If he does anything different, I’d be very surprised,” he added.

As a current senior official at the SEC, Tom Sporkin was limited in what he could say about the Goldman case. He did emphasize that the SEC’s complaint included the signatures of both the chief and the deputy chief of the newly formed Structured and New Products Unit within the Enforcement Division. Tom Sporkin said that the Goldman case grew out of this new specialized unit and a predecessor working group.

Stark agreed that the case was a watershed event for the concept of specialization and the restructuring now underway in the Enforcement Division. He also predicted that the Goldman case’s spotlight on the market for complex derivatives such as CDOs would cause everybody with gripes on those products to come forward, and said the recent revamp of the SEC’s tips, complaints, and referral intake system (under Tom Sporkin’s office) would help the SEC better handle this crush of new complaints.

Curtis, who left the SEC in December 2009, confessed that he was “less enthusiastic” than the others that the Goldman case is a pivotal moment for specialization within the Division. He offered a reminder that the SEC filed several sub-prime and auction rate securities-based cases prior to Goldman, and that the investigative work on the case extended back well before the specialized units existed.

Goldman received a ““Wells call” from Enforcement staff in mid-2009 advising it that the SEC staff intended to recommend to the Commission that it bring an enforcement action. Initial press reports, however, have indicated that Goldman may have been blindsided by the timing of the SEC’s filing of the case in April. That’s unusual; the staff typically contacts a firm to alert it that the agency plans to file an enforcement action the next day. How did this apparent disconnect occur in such a high-profile case, and does this reflect a dramatic change in SEC practice?

Curtis agreed this was a major departure from usual practice and said he didn’t know how it came to pass. He emphasized that the Wells process, and the opportunity to attempt to address the SEC’s concerns prior to the filing of a case, are a critical stage in the case for respondents. Curtis pointed out, however, that the SEC’s charges against Goldman came on the same day that the SEC inspector general released a report that lambasted the Enforcement Division’s mishandled investigation of the Allen Stanford Ponzi scheme. “I don’t think that was by chance,” he said, adding that he found the situation both “puzzling” and “striking.”

Judge Sporkin said that while the timing of the case’s filing may have surprised Goldman, lawyers whose clients receive a Wells call from the SEC are warned that there is exposure. In such situations, he said, one tactic is to send the SEC a Wells submission with a specific request that if the arguments are not persuasive and the SEC intends to move forward, that the respondent be allowed to meet with the staff to discuss a settlement. Judge Sporkin said that this can help insert a vital “brake” in the process for a regulated entity seeking to avoid litigation with the SEC.

The panel also wrestled with the new whistleblower statutes now being proposed in Congress. Legislation passed by the House in December 2009, for example, provides a bounty program to compensate whistleblowers whose information leads to a successful enforcement action with a monetary sanction exceeding $1 million. In such cases, the SEC may pay a bounty award of up to 30 percent of the sanction imposed.

Curtis warned that the volume of tips and complaints that come in to the SEC is already overwhelming, and that a bounty statute is only likely to encourage more. Curtis wondered if the SEC’s current structure would be able to absorb the potential flood of new information—saying that if not, the statute would be a “fiasco” and essentially an “unfunded mandate.”

In the last year, the Enforcement Division has introduced specialized units and flatter management and hired numerous former federal prosecutors to fill key senior positions. Is it desirable for the Division to look more and more like a prosecutor’s office, one member of the audience asked?

Judge Sporkin got in the panel’s last word with his thoughtful response to this question. He noted that there are many great things about prosecutor’s offices, including a consistent focus on whether the evidence you have collected will permit you to bring a case. He said, however, that the SEC has one important difference that can’t be forgotten: its mission is to prevent or end misconduct on a broad, market-wide scale more than to punish individuals.

A video recording of this live event is available below.