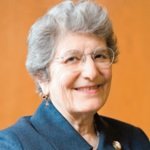 “Roberta Karmel was the first female Commissioner in the SEC’s then-43 years of existence, serving from 1977 to 1980. Today, she is well known for her prolific writing and commentary in the field.  Roberta Karmel is another example of a gifted staff member who rose through the ranks to one day serve on the Commission. She was an Assistant Regional Administrator, a Branch Chief, and a staff Attorney in the Commission’s New York Regional Office (from 1962 to 1969). She also served as Public Director of the New York Stock Exchange and chaired the NYSE’s internal ‘court of appeals,’ reviewing disciplinary actions taken by the NYSE against its members.”

“Ms. Karmel also served in private practice for over 30 years with Willkie Farr & Gallagher, Rogers & Wells and Kelley Drye & Warren.  She was a Fulbright Scholar studying the harmonization of the securities laws in the European Union. Today, she is probably best known as a prominent and widely published securities law commentator and professor at Brooklyn Law School. She has authored dozens of articles that have appeared in books and legal journals, and she is the author of influential book, ‘Regulation by Prosecution: The Securities and Exchange Commission Versus Corporate America.’”