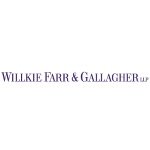 Stellmach joins Willkie from the U.S. Department of Justice, where he recently served as Acting Chief of the Criminal Division’s Fraud Section. While at the DOJ, Stellmach served as co-lead trial counsel in the successful prosecution of Robert Allen Stanford for his role in orchestrating an $8 billion Ponzi scheme.

Previously, Stellmach served as an Assistant United States Attorney in the Criminal Division of the Southern District of New York, as well as a Senior Counsel in the SEC’s Division of Enforcement.