Mayer Brown announced today that Daniel L. Stein, former Chief of the Criminal Division in the US Attorney’s Office for the Southern District of New York (SDNY), will join the firm’s New York office as a partner in the Litigation & Dispute Resolution practice, where he will lead the firm’s global Regulatory & Investigations group […]

Wells Fargo & Co. is cooperating with an inquiry by California officials into fake accounts opened in customers’ names without their authorization, the banking giant said Wednesday. The Los Angeles Times published a search warrant served Oct. 5 by state Attorney General Kamala Harris’ office as part of a criminal investigation into whether the bank […]

Get caught up with the Securities Docket News Wire for October 22, 2016.

The SEC alleges that James C. Cope obtained more than $56,000 in ill-gotten gains by purchasing securities in Pinnacle’s acquisition target, Avenue Financial Holdings, prior to the banks’ joint public announcement later that month.  According to the SEC’s complaint, Cope learned confidential details about the planned merger during a board executive committee meeting on Jan. […]

Appearing before the annual Securities Docket Conference in Washington, DC on October 13, Kara Novaco Brockmeyer, the Chief of the Securities and Exchange Commission’s FCPA Unit, laid out the Commission’s FCPA enforcement priorities, including insight on how to avoid an SEC-imposed monitor. via FCPA Chief Touts Record High Enforcement Actions – Links Avoiding a Monitor […]

Newly disclosed information from a federal government agency gives an intriguing look at two law firms that scored big from the financial crisis. According to the disclosure from the National Credit Union Administration, more than $1 billion in contingency fees were paid to Washington, D.C., trial and appellate firm Kellogg, Huber, Hansen, Todd, Evans & […]

Get caught up with the Securities Docket News Wire for October 20, 2016. 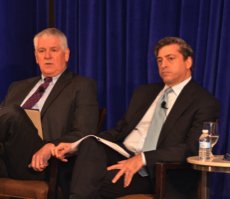 Apparently, you can only express your “disappointment” in someone so many times before you need to go to Plan B — taking it up with their boss. That is where things stand now between U.S. Senator Elizabeth Warren and SEC Chair Mary Jo White after Warren’s October 14, 2016 letter to President Obama asking the President to demote […]

In the keynote address at the 2016 Securities Enforcement Forum last week, Andrew J. Ceresney, Director of the SEC’s Division of Enforcement, made clear that the SEC will continue and even expand its focus on the public finance market, particularly in the municipal securities area. via Ceresney Warning: Expect Continued SEC Enforcement Activity Regarding Municipal […]