According to the latest update on the Coinschedule website (here), there have been a total of 228 initial coin offerings so far this year through mid-October, raising a total of over $3.6 billion. At least five of this year’s ICOs have raised over $100 million. This burgeoning activity notwithstanding, ICOs are at the center of […]

In a legal filing Wednesday, the administration said it would no longer defend a federal appeals court decision that upheld the commission’s use of in-house judges. U.S. Solicitor General Noel Francisco said SEC judges are “officers,” rather than employees, making them subject to constitutional requirements about how they can be appointed. Francisco urged the high […]

The new trial is set to begin Tuesday before U.S. District Judge John Kane — exactly five years from the day the U.S. Securities and Exchange Commission levied its allegations. The SEC maintains the 56-year-old former chief executive of Delta Petroleum told at least two friends — who then told others — that late-billionaire Kirk […]

If knowledge boundaries are set to blur, insider trading laws need to be updated. Reporting requirements have to change too. So how should regulators respond to a world where some investors listening to a quarterly earnings call already know the exact number of trucks that left the company’s warehouse over the summer — with shadow […]

On November 15, 2017, when the SEC Enforcement Division released its annual report detailing its enforcement activity during the preceding fiscal year, the report included a statement by the division’s co-directors detailing the division’s priorities for the coming year. As detailed below, the enforcement statistics in the report clearly reflect an agency in transition. The […]

Can the SEC and DOL really harmonize advice standards for brokers and advisers? — InvestmentNews

As regulators struggle to harmonize retail-advice rules, blending them into a single fiduiciary standard, count on hearing some sour notes from the industry. In fact, nowhere is the debate over investment advice standards more discordant than surrounding the term “harmonization.” Over the next two years, harmonization will be at the heart of the work of […]

Members of the Securities and Exchange Commission’s staff have been hearing recently from a former colleague with an urgent question: Why aren’t you cracking down on these initial coin offerings? Initial coin offerings are a relatively new method that entrepreneurs have used to raise money for start-ups, by selling custom-built virtual currencies. The practice has […] 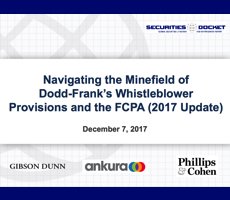 Dec. 7 Webcast: Navigating the Minefield of Dodd-Frank’s Whistleblower Provisions and the FCPA (2017 Update)