On March 1, 2018, John Cronan, Acting Assistant Attorney General for the Criminal Division of the U.S. Department of Justice (the “DOJ”), and Benjamin Singer, Chief of the Securities and Financial Fraud Unit of the DOJ Fraud Section, announced that the DOJ will use the Foreign Corrupt Practices Act Corporate Enforcement Policy (the “FCPA Policy”) […]

Coinbase, the cryptocurrency trading platform, announced Tuesday the launch of an index fund which will allow investors to put money into a basket of four of the largest cryptocurrencies. The so-called Coinbase Index Fund will give investors access to the digital currencies listed on GDAX, the exchange operated by Coinbase. It will be weighted by […] 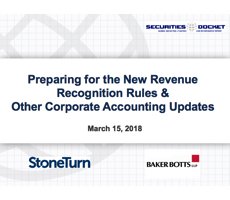 On February 7, 2018 the SEC’s Office of Compliance Inspections and Examinations (OCIE) announced its 2018 National Exam Priorities. The priorities, formulated with input from the Chairman, Commissioners, SEC Staff and fellow regulators, are mostly unchanged from years past (New Year, Similar Priorities: SEC Announces 2017 OCIE Areas of Focus). However, the publication itself is presented […]

When choosing transactions to test as part of anti-bribery assessments, the usual suspects include expense accounts like consulting, marketing, promotions, commissions, or miscellaneous. Other expense accounts are selected based on the nature of the company’s business, risk factors or descriptions of the account. But don’t overlook the balance sheet. While it is true that corrupt payments […]

Virtual currencies like bitcoin can be regulated as commodities by the U.S. Commodity Futures Trading Commission, a federal judge ruled Tuesday. U.S. District Judge Jack Weinstein in Brooklyn ruled that the CFTC had standing to bring a fraud lawsuit against New York resident Patrick McDonnell and his company Coin Drop Markets, allowing the case to […]

How To Save Crypto Through Thoughtful Regulation

Because of a lack of written legislation dealing with crypto assets, deciding how to regulate them has been left up to the regulatory bodies and not the citizens up until now. There isn’t anything wrong with the SEC enforcing laws in the way it best sees fit; the problem lies in the fact that we, […]

The New York Stock Exchange and two of its more specialized exchanges on Tuesday were fined by the Securities and Exchange Commission, for allegedly making up rules as they went along in the face of market volatility. The $14 million fine in part was the result of being a recidivist after previous violations were settled […]