Washington’s “political intelligence” industry was supposed to be the focus of an insider-trading trial under way in Manhattan. But it’s Deerfield Management that’s in the spotlight in the early proceedings. Former Deerfield trader Jordan Fogel told jurors Thursday how he and others used non-public information they got from a health-care industry consultant to make millions […]

SEC Awards More Than $2.2 Million to Whistleblower Who First Reported Information to Another Federal Agency Before SEC

The Securities and Exchange Commission today announced a whistleblower award of more than $2.2 million to a former company insider whose tips helped the agency open an investigation that led to an enforcement action.  The whistleblower first reported the information to another federal agency and later provided the same information to the SEC. via SEC […] 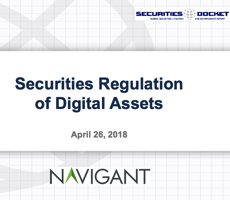 The Securities and Exchange Commission today announced that Joel R. Levin has been named Director of the Chicago Regional Office.  He will join the agency next month. Mr. Levin is a veteran federal prosecutor who has served in various senior leadership positions in the Department of Justice over the last 25 years.  Since 2014, he […]

If there was ever a regulatory grace period for virtual currencies and blockchain technology, it is officially over. Five federal regulators—The Financial Crimes Enforcement Network of the US Treasury Department (FinCEN), the Securities and Exchange Commission (SEC), the Commodity Futures Trading Commission (CFTC), the Internal Revenue Service (IRS) and the Office of Foreign Assets Control […]

Search for SFO director hit by more delays as announcement unlikely to be made over parliamentary recess | City A.M.

The Serious Fraud Office (SFO) is unlikely to announce its new director before parliament reconvenes on 17 April as the troubled search for a new head to replace David Green stumbles on. The SFO had been planning to announce its successor to Green by 6 April, possibly earlier, but will not be able to do […]

James Gatta, Chief of the Criminal Division of the U.S. Attorney’s Office for the EDNY, Rejoins Goodwin as Partner | Goodwin

Global 50 law firm Goodwin announced today that James D. Gatta, the former Chief of the Criminal Division for the U.S. Attorney’s Office for the Eastern District of New York (EDNY), has rejoined the firm’s New York office as partner in its Government Investigations and Enforcement and White Collar Defense practices. Gatta was an associate […]

The alert includes an audio recording of an actual imposter making a fraudulent pitch, excerpted below: “…I’m a senior compliance officer with the Securities and Exchange Commission… I am confirming a buy order from Mr. [REDACTED], who is a portfolio manager of [REDACTED]…in accordance to the regulations that are set forth by the Securities and […]