The U.K.’s top law-enforcement body is examining allegations that an employee leaked information to a suspect in exchange for money, undermining a probe into a suspected network of European insider traders, according to people familiar with the matter. The internal corruption unit of the National Crime Agency, the U.K.’s equivalent of the Federal Bureau of […]

The head of the UK Serious Fraud Office says she intends to make greater use of the US-style tactic of persuading insiders to co-operate with investigators to speed up criminal probes following the delay or failure of a number of high-profile cases. Lisa Osofsky told the Commons justice committee on Tuesday that she was personally […] 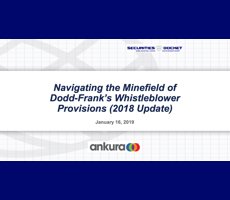 Wells Fargo will pay $575 million in a settlement with attorneys general from all 50 states and the District of Columbia that are investigating fake accounts opened without the knowledge of customers and a string of other dodgy practices. Under the agreement announced Friday, the bank will also create teams to review and respond to […]

While it is impossible to know who initiates most bribe situations, the giver or the receiver, one thing is clear: no bribe can take place without both. It is for this reason that international conventions such as the OECD Anti-Bribery Convention and the UN Convention Against Corruption encourage state parties to address both sides of […]

A former Goldman Sachs Group Inc (GS.N) employee pleaded guilty on Wednesday to engaging in insider trading based on non-public information about several companies that were clients of the investment bank, Manhattan federal prosecutors announced. Woojae “Steve” Jung, who was a vice president with the bank in San Francisco, has agreed to forfeit $130,000 he […]

In the event of a federal government shutdown, the SEC will proceed in accordance with the agency’s plan for operating during a shutdown. As that plan contemplates, we are currently making preparations for a potential shutdown with a focus on the market integrity and investor protection components of our mission. Should a shutdown occur and continue beyond […]

Two congressmen are introducing a bill Thursday that would exclude digital currencies from the decades-old definition of a security. The legal definition might seem like an insignificant change, but it has become a heated issue for those in the industry who say the law is outdated for a digital asset class. The “Token Taxonomy Act” […]