The SEC’s complaint alleges that Gene Daniel Levoff, an attorney who previously served as Apple’s global head of corporate law and corporate secretary, received confidential information about Apple’s quarterly earnings announcements in his role on a committee of senior executives who reviewed the company’s draft earnings materials prior to their public dissemination.  Using this confidential […]

Is There a First-Drafter Advantage in M&A?

Does the party that provides the first draft of a merger agreement get better terms as a result? There is considerable lore among transactional lawyers on this question, yet it has never been examined empirically. In a recent article, Is There a First-Drafter Advantage in M&A?, we develop a novel dataset of drafting practices in […] 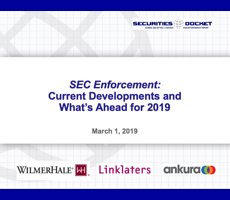 According to the SEC’s complaint, Lucent Polymers, Inc. premised its business model on its ability to transform “garbage to gold” – that is, to use low-grade, non-prime feedstock to develop high-quality plastics. The company’s near-magic “garbage to gold” process, the SEC alleges, was a huge commercial success. However, the complaint alleges that Lucent’s business model […]

Sure, they have billions of dollars invested and spend millions in consulting and advisory fees. But now, some of the world’s largest private equity investors, along with an industry group, are demanding oversight over the industry they’re largely funding. On Tuesday, the Institutional Limited Partners Association and 35 of its member institutions sent a letter […]

Mr. Moonves, acting CEO Joe Ianniello, chief accounting officer Lawrence Liding and former communications chief Gil Schwartz collectively sold more than 3.4 million shares worth over $200 million before the company’s July disclosure that it would investigate Mr. Moonves, according to an amended complaint filed Monday in federal court in the Southern District of New […]