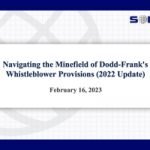 The Securities and Exchange Commission today announced an award of more than $28 million to joint whistleblowers who provided critical information and assistance in an SEC enforcement action. The joint whistleblowers’ detailed information prompted the opening of the SEC staff’s investigation and significantly contributed to the success of the action. They provided substantial analysis and […]

Steve Cohen’s Point72 has been granted regulatory approval in the UK, a decade after his previous firm paid a record $1.8 billion in fines after pleading guilty to insider trading charges, according to a report by the Financial Times. The Financial Conduct Authority had turned down Point72’s applications two previous occasions following SAC Capital’s sanctions […]

Regulators are in no hurry to write rules for crypto. The Securities and Exchange Commission and Commodity Futures Trading Commission have brought a combined total of more than 100 enforcement actions against crypto-asset market participants. Yet, neither agency has issued a single crypto-specific rule, and it is unlikely that they will change course any time […]

In response, attorneys for Holmes said and her husband, William Evans, had booked the trip before the verdict was reached because she “hoped to be acquitted and thus to be able to attend the wedding of close friends in Mexico in late January 2022. The lawyers said Holmes “did not intend to make the trip” […]

Why not set forth a coherent legal framework in a rule? After all, if we continued with our regulation-by-enforcement approach at our current pace, we would approach 400 years before we got through the tokens that are allegedly securities.[46] By contrast, an SEC rule would have universal—albeit not retroactive—coverage as soon as it took effect. […]

Not long before FTX collapsed in November, its founder, Sam Bankman-Fried, sent $400 million to an obscure cryptocurrency trading firm called Modulo Capital. The fledgling firm, which was founded in March and operated out of the same Bahamian compound where Mr. Bankman-Fried lived, had no track record or public profile. One of the founders, Duncan […]