The UK financial regulator has conceded it is “not capable” of properly supervising Binance despite the “significant risk” posed by the cryptocurrency exchange’s products, which allow consumers to take supercharged bets. In a supervisory notice two months after starting a crackdown on the exchange, the Financial Conduct Authority — one of the most influential financial […] 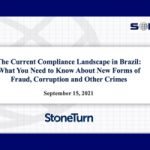 Wirecard employees hauled millions of euros of cash out of the group’s Munich headquarters in plastic bags over a period of years, according to former employees, suggesting that the payments company was looted even more brazenly than previously known. The once high-flying fintech, which at its peak was worth €24bn, went bust last summer in […]

The scandal over the collapse of Wirecard AG expanded as German financial regulator BaFin faces a criminal probe into how it oversaw the payment processor and whether some of the agency’s staff illegally traded the stock. Frankfurt prosecutors said Monday they opened the probe after reviewing information collected from BaFin in February when they visited […]

China Creates its Own Digital Currency, a First for Major Economy – WSJ

A thousand years ago, when money meant coins, China invented paper currency. Now the Chinese government is minting cash digitally, in a re-imagination of money that could shake a pillar of American power. It might seem money is already virtual, as credit cards and payment apps such as Apple Pay in the U.S. and WeChat […]

The Sure Thing podcast: ‘It was just chaos’: The day police cracked an $8 million scam

One of the men behind Australia’s biggest insider trading case has broken his silence, detailing his role in a heist of almost $8 million involving secret accounts, betrayal and a police chase resembling a mafia sting. Christopher Hill, who worked at the Australian Bureau of Statistics at the time, and passed confidential information to NAB […]

Mr. Freis was due to join the German payments company’s management board on July 1, but he was called in early, on June 18, when Wirecard said it couldn’t verify $2 billion in assets. With Wirecard’s auditors refusing to sign off on the company’s financials, Mr. Freis was asked to assess the situation. He reached […]

Germany’s financial watchdog has reported one of its employees to state prosecutors on suspicion of insider trading linked to Wirecard, shortly before the payment firm’s spectacular collapse. Source: German regulator reports Wirecard insider trading in own ranks | Reuters

A former UBS compliance officer and her family friend have had their appeals against insider trading convictions quashed by the court. In June last year Fabiana Abdel-Malek and Walid Choucair were each convicted of five offences of insider dealing and sentenced to three years in prison at Southwark Crown Court. The case was brought by the Financial Conduct Authority […]