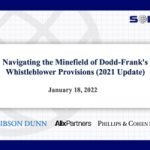 According to the SEC’s complaint, Medallion’s core business was making loans backed by taxicab medallions to taxicab owners and operators. However, the popularity of ride-sharing companies like Uber and Lyft led to a decline in the value of taxicab medallions and of Medallion’s stock price. Murstein and Medallion allegedly directed two separate schemes to inflate […]

Washington grapples with how to expand crypto oversight | TheHill

Liftik said it will likely require legislation to clearly delineate which federal agencies — or perhaps a new one devoted exclusively to digital assets — are responsible for overseeing which parts of the cryptocurrency industry.” Once you have the rules of the road, it’s easy to tell who’s following them. You can catch the speeders, […]

The U.S. Securities and Exchange Commission said on Wednesday that the proposals from Valkyrie Investments and Kryptoin failed to meet requirements to prevent fraudulent and manipulative practices that are needed to protect investors. It allowed futures-backed Bitcoin ETFs to be offered in October. The earlier-than-expected decision from the SEC could suggest a 2022 approval for […]

In this June 2013 Wall Street Journal op-ed titled “Mum’s the Word About SEC Defeats,” I called out the SEC for its troubling refusal to update its website when it loses or dismisses an enforcement case that it previously touted. After all, I argued, the agency routinely splashes its incendiary allegations of wrongdoing across its website […]

According to the SEC’s order, before Nikola had produced a single commercial product, Milton embarked on a public relations campaign aimed at inflating and maintaining Nikola’s stock price. Milton’s statements in tweets and media appearances falsely gave investors the impression that Nikola had reached certain product and technological milestones. The order finds that Milton misled […]

The Securities and Exchange Commission today announced fraud charges against five Russian nationals for engaging in a multi-year scheme to profit from stolen corporate earnings announcements obtained by hacking into the systems of two U.S.-based filing agent companies before the announcements were made public. The filing agents assist publicly traded companies with the preparation and […]

What is government’s role? Regulation is essential to our financial markets, and there is no doubt that tokenized financial assets should be regulated to ensure financial stability, promote capital formation, prevent illicit activity, and protect consumers. But there is more the U.S. government must do. Innovators must have assurances that if they follow time-tested regulatory […]