The SEC Seeks to Supplant the Market – WSJ

The SEC’s mandate is vital but limited. Securities laws empower the commission to combat market abuses and fraud and to ensure that investors have material information to make their own investment judgments. As President Franklin D. Roosevelt explained when signing the Securities Act of 1933, “It is, of course, no insurance against errors of judgment. […]

Eisenberg, a 27 year-old U.S. citizen who was arrested and detained at MDC Guaynabo, Puerto Rico, is awaiting transport to appear before the Southern District of New York where he is facing parallel criminal and civil charges, brought by the Department of Justice and the Commodities Futures Trading Commission (CFTC), respectively. According to the SEC’s […]

Late last year, after a wave of news reports pointing to sagging demand for his company’s vehicles, Tesla Inc. Chief Executive Elon Musk sold almost $3.6 billion of his shares in the electric-car maker. On Jan. 2, Tesla announced fourth-quarter vehicle deliveries that were significantly below the company’s most recent forecast to investors. The news […]

The Securities and Exchange Commission today charged Nexo Capital Inc. with failing to register the offer and sale of its retail crypto asset lending product, the Earn Interest Product (EIP). To settle the SEC’s charges, Nexo agreed to pay a $22.5 million penalty and cease its unregistered offer and sale of the EIP to U.S. […] 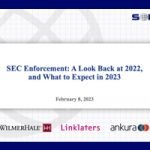 But in 2020 the Supreme Court finally stepped in and essentially told the SEC it had no lawful basis for many (if not most) of those disgorgement awards. More specifically, the Court held in Liu v. SEC that disgorgement is an equitable remedy only when it doesn’t exceed a wrongdoer’s personal net profits and is […]

After a seven-day trial, a jury in the United States District Court for the District of Connecticut found Bernard Findley and Halitron Inc, liable for securities fraud in connection with their false and misleading statements in press releases as part of a scheme to defraud investors. “We are pleased with the jury verdict holding Bernard Findley […]

A Question for Congress: Why Didn’t the SEC Stop FTX? – WSJ

If the SEC has the authority to regulate crypto exchanges, it should have done so long before now. The SEC could have simply prohibited U.S. customer assets from being held by unregulated crypto exchanges. Instead, as we have written in these pages, the SEC’s only action made the problem worse by blocking banks and brokers […]