Among Robinhood’s latest recruits is Erica Crosland, until this month a securities litigation and enforcement counsel at WilmerHale in Washington. Crosland, now a principal counsel for litigation and investigations at Robinhood, didn’t respond to a request for comment about her new role. Source: Robinhood Adds Another WilmerHale Lawyer As Legal Ranks Grow (1)

How the SEC Became the Investor’s Collection Agent | LinkedIn

The Securities and Exchange Commission has long described itself as “the investor’s advocate,” a motto coined in the late 1930s by William O. Douglas, the agency’s third chairman (and later a Supreme Court Justice). A more appropriate moniker for today’s SEC might be “the investor’s collection agent.”Belatedly slipped into this year’s1480-page, must-pass defense appropriations bill – […]

The number of federal court securities class action lawsuit filings declined in 2020 relative to the most recent prior years, largely due to short-term filing lulls during the second and fourth quarters of the year. Though the number of filings last year was below the record-setting levels seen during the years 2017 to 2019, the […] 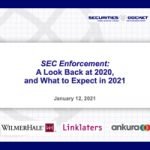 Elad Roisman is expected to lead the Securities and Exchange Commission after Chairman Jay Clayton’s recent departure, a fellow commissioner at the agency said Thursday. Mr. Roisman, a Republican commissioner at the SEC, is likely to run the commission for just the few weeks that remain in President Trump’s term. The pick hasn’t been announced […]

Remember Enron? It Could Happen Again on Biden’s Watch

I recently submitted a letter to President Donald J. Trump informing him that today, December 23, 2020, will be my last day as Chairman of the Securities and Exchange Commission.  The text of the letter is included below. Source: SEC.gov | Statement of SEC Chairman Jay Clayton

President Trump on Tuesday pardoned former Rep. Chris Collins, who was imprisoned in October after pleading guilty to felony insider trading charges. The early evening pardon prompted outrage from Collins’ critics and dead silence from Trump’s fellow Republicans. “Today, President Trump granted a full pardon to Chris Collins, at the request of many Members of […]

Statement on the Tenure of SEC Chairman Jay Clayton

Statement by Commissioner Elad L. Roisman: It is hard to sum up my gratitude and admiration for Chairman Clayton’s leadership of this agency. During his tenure at the SEC, he has focused on bringing together its talented and dedicated staff to make major strides in advancing the Commission’s tri-partite mission of protecting investors, maintaining fair, […]