Are the job security provisions enjoyed by SEC administrative law judges unconstitutional? The Supreme Court majority kicked that question down the line in its 2018 Lucia v. SEC decision. The Fifth Circuit may just have picked it up, as a three-judge panel enjoined an administrative rehearing of a pre-Lucia accounting violations case against Michelle Cochran. […]

Unless the Supreme Court or Congress intervenes, some SEC defendants will have access to federal court juries and some will not despite similar allegations and punishments put forth by the SEC. via SEC’s In-House Judge System Denies Access to Juries | ThinkAdvisor.

The Securities and Exchange Commission said it would rehear dozens of cases recently brought before its in-house judges, in response to the Supreme Court’s ruling that the judges had not been properly appointed. Lawyers for the commission said in a court filing late Wednesday that the agency had reaffirmed the appointments of the same five […]

In a much-anticipated opinion issued last Thursday, the United States Supreme Court resolved a circuit-court split, holding that the administrative law judges (“ALJs”) of the Securities and Exchange Commission (“SEC” or the “Commission”) are “officers” subject to the requirements of the Appointments Clause of Article II of the U.S. Constitution. Reversing the Court of Appeals […]

“Since we’ve been in this job, which has now been just about a year, the circumstances in which we’ve filed litigation actions as administrative proceedings have been fairly limited,” Avakian said. “And I would say broadly they’ve been limited to circumstances where either the charges that we’re pursuing are only available in the administrative forum, […] 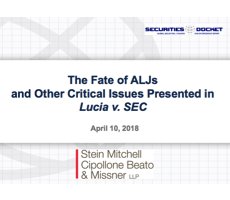 Here’s a figure about my new home that’s been getting a lot of attention: 90 percent.  Supposedly, “in about 90% of cases, an SEC Administrative Law Judge’s (‘ALJ’) initial decision became final when the Commission [did not] engag[e] in plenary review” of the decision.[1]  That statistic has become the basis for the argument that, since […]