In remarks prepared for delivery in New York on Monday, Jay Clayton said countries that neglect to punish corporate bribery create a two-tiered system that gives their domestic companies a leg up on U.S. firms that face punishment for not following the law. “For the past two plus decades we have vigorously enforced the Foreign […]

When choosing transactions to test as part of anti-bribery assessments, the usual suspects include expense accounts like consulting, marketing, promotions, commissions, or miscellaneous. Other expense accounts are selected based on the nature of the company’s business, risk factors or descriptions of the account. But don’t overlook the balance sheet. While it is true that corrupt payments […] 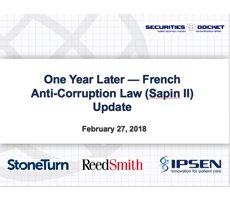 The UK Serious Fraud Office said Thursday it charged two men in connection with its investigation of Unaoil. Ziad Akle and Basil Al Jarah were both accused of conspiracy to pay bribes to help Unaoil’s client SBM Offshore NV win contracts in Iraq. via SFO charges two in Unaoil probe – The FCPA Blog

Fixers purged in a crackdown on foreign deals | This is Money

An international crackdown on using fixers who bribe government officials and firms to win foreign contracts has led to major shake-ups at some of Britain’s biggest companies. The Serious Fraud Office and other law enforcement agencies are targeting the actions of middlemen who have been used by UK firms for decades to help set up […]