The Supreme Court announced this week that it will let stand the Second Circuit’s landmark insider trading decision in U.S. v. Newman. Hillary Clinton, however, says that as President she would not do the same, and that she would propose legislation to “clarify” the law post-Newman. via Hillary Clinton Pledges to Redefine Insider Trading, Self-Fund […]

ABA weighs in, in favor of SEC self-funding. Bill follows urging of the SEC chairman and commissioners for a self-funded agency. SEC Self-Funding: The Time Has Come

It is time to see if the SEC can better execute its mission under a self-funded model. 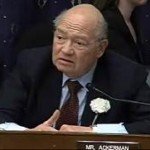 When it comes to funding the SEC, it is time for Congress to put up, shut up, or perhaps just give up and allow the SEC to self-fund.