The provocative theory is that the big banks have not paid enough in recent legal settlements to make amends for their role in stoking the subprime housing boom and bust. Hedge funds, contending that the banks have so far underpaid, have bought subprime mortgage-backed bonds, which they hope will rise in value. That would happen […]

SEC charges investment bankers at Credit Suisse Group with scheme to overstate the prices of $3 billion in subprime bonds.

The S.E.C. brings a “crowd-pleasing case.”

ALJ finds two executives were unaware of the vulnerability of the subprime securities when they made disclosures. S&P argues to SEC why agency should not commence enforcement proceedings related to ratings of subprime mortgage-related securities.

SEC alleges fraud in structuring and marketing of CDO tied to subprime mortgages. Court rejects argument that CIBC could have anticipated subprime crisis as alleged. 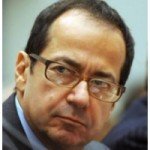 The SEC requests information from Paulson & Co. in connection with probe into subprime fraud. Rating Agencies Off the Hook in Lehman Case

Investors’ suit against Moody’s and Standard and Poor’s dismissed.