One year after taking down his entire brokerage firm through a scheme that the SEC labeled as “deliberate, brazen, and ultimately ill-conceived,” former trader David Miller was sentenced to 2 1/2 years in prison. Miller pleaded guilty in April 2013 to charges of wire fraud and conspiracy to commit wire and securities fraud. via Trader Sentenced to […] 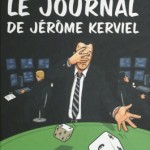 Remember when you read about (or maybe for some of you, represented) Jérôme Kerviel, the 31-year old junior trader who nearly brought down French bank, Société Générale, with his rogue trading?  Remember when you said to yourself, “someone should really make a comic book about this?”  No? Well, either way, “The Diary of Jérôme Kerviel” hits […]