In its Form 10-Q filed August 7, 2009, State Street Corp. disclosed that on June 25, 2009, SEC staff sent it a Wells notice related to the SEC’s ongoing investigation into disclosures and management by SSgA of its active fixed-income strategies during 2007 and prior periods.  The company stated that The SEC Staff has informed […] 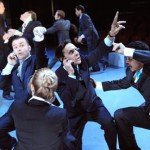 Enron, the play, opened in the UK last month to rave reviews.

In this video, CNBC’s Mary Thompson discusses the refusal of U.S. District Judge Jed S. Rakoff to sign off on the settlement between Bank of America and the SEC, setting up a hearing today on the matter.

The American Lawyer reports that sometime, very quietly, in the last year, David Aufhauser rejoined powerhouse law firm Williams & Connolly.  Aufhauser was previously the former general counsel and managing director of UBS. Aufhauser was most recently mentioned in Securities Docket, however, in October 2008, when we noted here that Aufhauser had agreed to forfeit […]